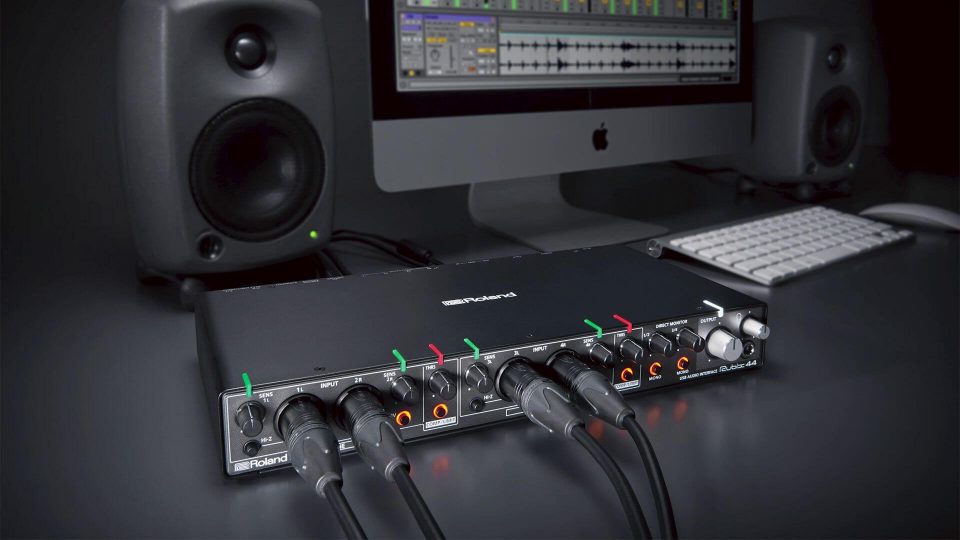 What is an Audio Interface?

An audio interface allows you to have full control of the sound going in and out of your computer.

They’re essential if you’re looking to record music and send audio to studio monitors. Producers used to rely on their PC soundcards to process audio. With technology now so advanced, audio processing is entirely outsourced to audio interfaces.

Another quirk of owning an interface is that latency is a thing of the past. Latency is playing a note on your MIDI keyboard but not hearing that note in your headphones until a second later. It’s an issue when computers process audio while doing everything else that a computer does! But, because an audio interface is the sole processor of your audio, you won’t need to worry about that (yay!).

One last thing: preamps. The music that you record will be very quiet when converted into a signal, so a preamp boosts the gain level to an audible level. As a user, this will be a single button that you can press and the interface does the rest.

Why Do I Need an Audio Interface?

Well, they enable bands to record more than one source at once. If I want to record a sweet guitar groove but record my vocals in a separate channel at the same time, I can do that. This makes your life very blissful in the editing stage later on. If you need more than a guitar & vocal channel, there are interfaces with more inputs!

Audio interfaces also give you control over audio routing. This means sending your recorded guitar to your speakers and your headphones. You could even send your audio to two pairs of speakers if you have 2 output channels on your audio interface.

Another benefit is the knobs themselves. Wouldn’t you rather have a physical knob to raise the volume over a mouse or keyboard?

What Should I Look For in an Audio Interface?

This will be the ultimate deciding factor. But something for you to consider is that spending a little extra can make a positive impact.

Bear in mind that you want the best signal chain quality that you can get. Having a good microphone and monitoring system won’t mean much if your interface can’t process the audio to the same quality.

What I/O (Input/Output) You Need

Firstly, check that your potential audio interface has all the inputs and outputs that you need. If you are a singer-songwriter, a single XLR input with a preamp & a line input for your guitar mic will do the job. If you are in a band, I’d take a look at models with two mic inputs and 4 line inputs at least (depending on your band).

Make sure that the Interface sounds good. Spend time browsing the manufacturer’s site to investigate its specifications.

Look out for a low Total Harmonic Distortion + Noise (THD+N). This is everything coming out of your interface other than the signal, which is noise (like hisses). You should be a low number.

Dynamic Range is the difference between the loudest and quietest signal that an interface can process. Opposite to THD+N, the bigger the number the better.
It’s worth noting that the dynamic range of modern music is lower than the highest that an interface may be, so it’s not worth stressing about this.

Frequency Response means how accurate the interface can process frequencies across the spectrum. Look for as low a figure as possible between 20Hz and 20kHz. When reading a tech spec for an interface, it will be displayed like this: 20Hz – 20KHz, ± 0.01.

In an ideal world, you want an interface to reproduce frequencies of the same quality. However, you may find small volume cuts and/or boosts for certain frequencies… which isn’t very fun when mixing tracks down through your monitors.

Now you have the tools to explore the market and find the right audio interface for you. We’ve explored the basics of what they are, what they do, and what you should look for in one.