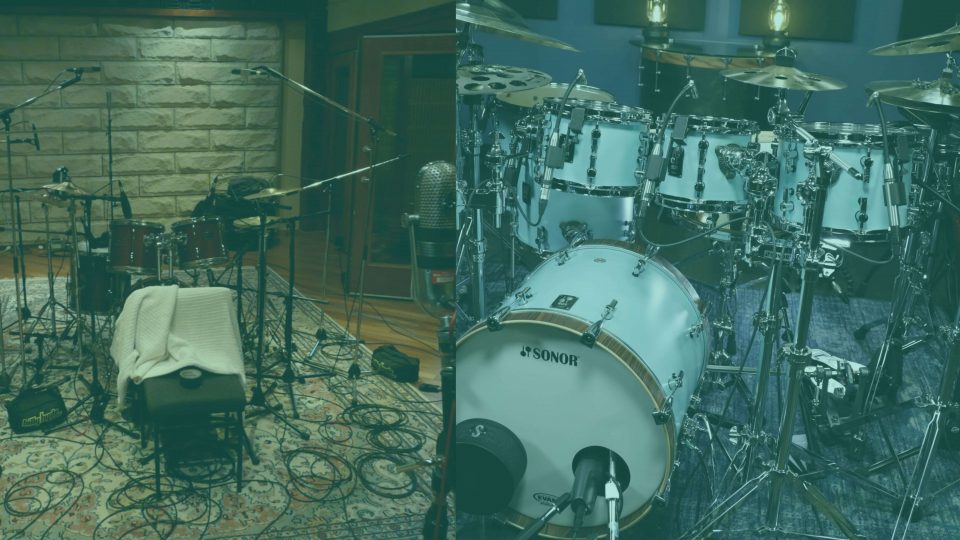 Recording an acoustic drum kit is one of the most difficult challenges for home recording artists to grapple. After all, there are many factors. What microphones do we need to record a drum kit? How many microphones are we supposed to use?

Think of drums as the foundation of your song. With no percussion, it’s harder for your listeners to grapple with what’s going on. It’s much harder to dance to, let alone find the rhythm! So, we need to ensure we capture our drums as cleanly as possible. How do we do that?

What Microphones Do I Need to Record Drums?

There are many microphones that you could use. Based on their build and pickup pattern, some mics are better at recording some elements of a drum kit more than others.

Listed in order of recording priority, let’s break down how you, my humble recording engineer, can get the best recording of your drum kit!

There are multiple ways to mic a kick drum which we’ll cover shortly. Let’s cover what mics are better for kick drums first.

Dynamic microphones are much more equipped for recording loud sound sources better than condenser microphones… and kick drums are pretty loud. If you don’t believe me, go wack a kick beater!

The microphone most renowned for kick drums is the Shure Beta 52A. Saying that the AKG D112 is also in a lane of its own for recording kick drums. Place your mic two to three inches away from your kick drum and you’re well away!

Now for the snare drum. Arguably the most important part of your drum kit because it defines the charter of the drums and has a major role in defining the character of a song. How do you record one to get that sweet snare sound?

Again, snare drums are very loud sound sources. Did somebody say something about dynamic microphones? Best placed hovering about 1.5 inches above the drum head itself, the use of a dynamic mic like the Shure SM57 is perfect for getting all the tonal qualities of your snare drum!

If you want to be able to pan your drums left and right in the stereo field to create some more interest for a segment of your song, you need some overhead mics (microphones that sit above the kit). Specifically… two. One left and one right.

For these, many studio engineers use large-diaphragm condensers due to a wider pickup pattern and bigger stereo field. A good example would be the Neumann U87, the Shure KSM44A, or the AKG C414.

To ensure your recordings are in phase, place your overheads at two different heights in proportion to your kit. To get a solid centre image, it may only be necessary to place your mics be as low as few as 2–3 inches or even up to 8–10 inches. The important thing is to bear in mind is to keep your overheads the same distance away from your snare drum.

If you have a budget that can afford a fifth, or maybe even a sixth, microphone, it’s time to get your tom drum mic’d up.

Remember that this is optional. Some of the most popular records featured drums recorded with only four microphones! Glyn Johns, a recording engineer who started his career assisting the Beatles and went on to work with the likes of The Rolling Stones and Led Zeppelin, only used four microphones to record drums for these legendary artists.

With that said, if you do have a budget for additional microphones, we recommend sticking with dynamic mics like the SM57 that we mentioned earlier. That is if your drummer (or you) is a loud drummer. If the drums aren’t going to be reaching insane volume levels, look into using a small diaphragm condenser microphone such as the AKG C451 B.

In the same way, as your mic snare is, place your tom mic(s) about 1.5 inches above your tom drum.

So… How Many Mics Do We Need to Record Drums?

As we discussed a moment ago, the maximum you actually need is four microphones. But what if I told you that you could record your drums using only one microphone?

Using One Microphone to Record a Drum Kit

So, to record your drum kit with just one microphone…. make sure you have an omnidirectional large-diaphragm condenser.

An omnidirectional pickup pattern allows the microphones to hear everything going on in a 360 degree around itself. Perfect.

When setting up your mic, make sure your kit is set up so that you can place the mic in the middle of the kit and each drum is equally as close.

Place the microphone directly above the beater on the kick drum, in between the snare drum, the rack tom and the floor tom.

Make sure your cymbals are equally as close to the microphone as all the other drums too.

Using Two or Three Microphones to Record a Drum Kit

This time you’re also going to need a large-diaphragm cardioid condenser microphone and place it so it’s sitting above the entire kit, but still directly above the kick drum beater. Make sure the microphone is facing down (towards the kit) so that it can actually receive a signal from the kit.

Now grab a dynamic kick drum microphone and place it outside of the kick drum! By outside, we mean the side the drummer isn’t sitting. We had to say this because you could also put the microphone inside (the actual inside) the kick drum too – as long as your kick drum has a circular cut-out.

Now you should have a punchy kick drum in your recording as well as a strong signal from the rest of the kit.

If you have three microphones and wanted to record in mono, keep your two microphone placement place the third directly above the floor tom. Again, if your drummer is a loud player, use a dynamic microphone. If they’re not, a large-diaphragm condenser will do just fine.

If you have three microphones and wanted to record in stereo, place two large diaphragm condenser microphones above the kit as overheads in positions that we discussed earlier. As well as these two overheads, keep your dynamic kick mic where it is.

Having these two overheads will allow you to pan your recording left and right.

Now that you’ve got a team of microphones working together, there’s one thing you need to check, check and check again.

Phase! Phase is time, and if your microphones are at distances away from your drums that don’t match up then they will receive signals at different times. This will cause chaos in your recording if not seen to, so make sure all of your recordings are in time with one another.

It’s finally time to talk about the most common set-up. Keep your dynamic kick mic and condenser overheads and where they are. All you need to add is a dynamic microphone 1.5-2 inches above your snare drum… and you have a perfect four mic setup!

Using a large-diaphragm condenser microphone like the Neumann U87, you can add further depth to your recording. They can glue the recording together!

Providing you have studio treatment set up to minimise reflected sound, there are multiple ways to set up your room mic. The easiest way to set your room mic up would be 6 feet in front or behind your drum kit, and about 6 or 7 feet high. It’s important that your room mic is above the kit to ensure it picks up the entire stereo image of the kit.

With this in mind, a dynamic mic such as the SM57 can also be great to capture the depth of the signal in your room!

Recording quality drums is easy once you know how to set your microphones up. Do you know what#’s even easier?

Mixxed works with a variety of sample creators and labels to deliver you a consistently growing catalogue of sounds for you to browse, download and keep forever. Mixxed is built by musicians for musicians, and we’ve created an easy to use interface so you can spend less time finding sounds and more time using them!

For less than $3 a month, you’ll have access to our extensive list of sounds and content by our contributors from a plethora of genres. Our users are already downloading our sounds and using them to create jaw-dropping tracks.

So, sign up today to find your sound and get involved!