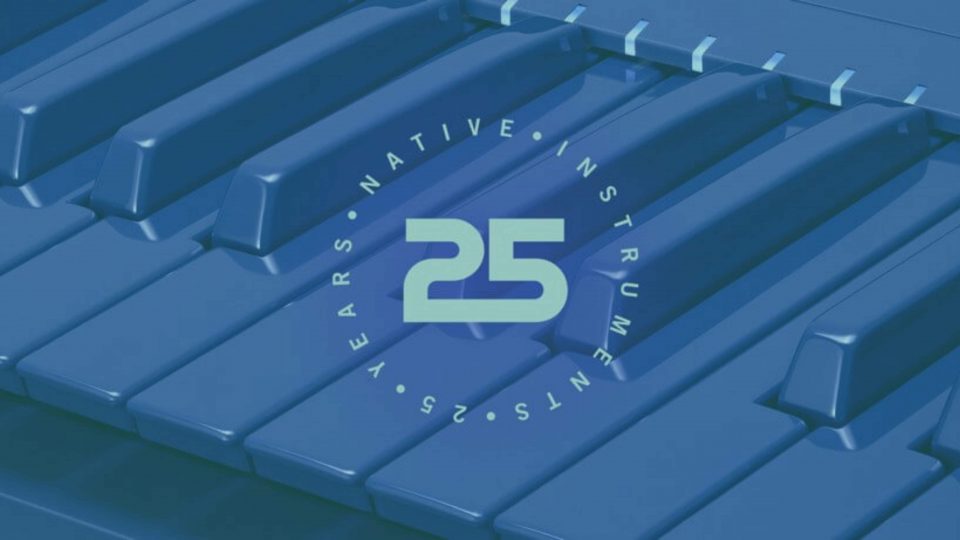 Twenty Five is a free virtual instrument for Kontakt 6. Twenty Five is an all-in-one product of Native Instruments’ finest sounds that music makers have come to love over the last twenty-five years. Designed for Kontakt, Twenty Five comes mapped with intuitive macro controls, powerful FX, and a built-in sequencer.

Twenty Five allows us to create new sounds by blending classic presets from 37 of their industry loved instruments across NI’s history. From much loved synthesizers of today such as Massive X, to NI’s very first synth Generator, a modular softsynth that was released in 1996! Also included are sounds from the their Reaktor synth.

Here’s what NI state about this once in a lifetime offer:

“The 25th Anniversary Collection reimagines iconic Komplete, Maschine, and Traktor hardware in a choice of either Vapor Gray or Ultraviolet colourways. The striking, monochromatic designs extend to every detail of these instruments and controllers, each of which has been hand-numbered and accented with reflective graphics commemorating NI’s anniversary. The full range encompasses Maschine+, Maschine Mk3, Komplete Kontrol S49/S61, Traktor Kontrol S4, and Traktor Kontrol X1.”

The CEO of Native Instruments, Daniel Haver, posted a message on the NI site.

“In 1996, we started with the idea to harness the power of the emerging PC to create a universe of sounds. Now 25 years later, we find ourselves in a completely transformed music industry. We are humbled that our work has been a driving force in democratizing music production, and are grateful to have been part of a tidal change in how music is created, performed, published and listened to, free from traditional gatekeepers and constraints.“

As well as releasing epic software, NI is holding a producer challenge across the globe on its metapop platform!

The competition invites producers and artists from anywhere and everywhere to create a track with Twenty Five!

A list of NI prizes could be yours for the taking. Winning entries will receive ultra-cool limited edition hardware, as well as all-new Komplete 13 packages! The competition has been running since October the 25th and will finish on the 31st of December.

The 25th Anniversary Collection of hardware is available to buy now from the NI Online Shop. Prices are exactly the same as the standard editions of the hardware!

Native Instruments understand that what a song needs to sound great… is great sounding samples.

Without a good sounding foundation, a song has started off on the wrong foot. You can’t make a bad sound good.

That’s why we at Mixxed want to give your music the best foot to start with, and we’re doing that by giving you the best samples. You’ll have access to thousands of loops and one-shots from countless contributors, and our arsenal of sounds is constantly growing.