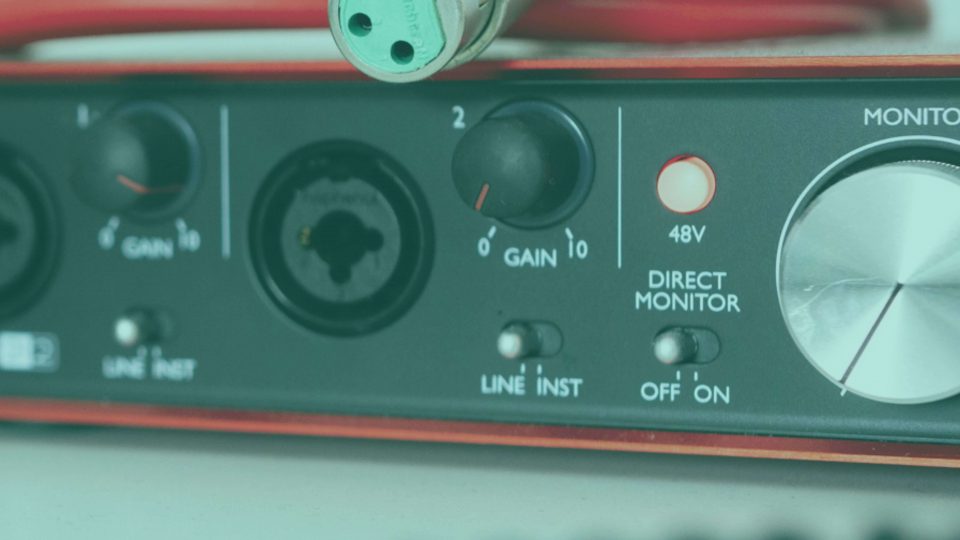 Your audio interface receives the electrical signal via an XLR, TS or TRS cable from your microphone and then converts it into binary data so that your DAW can interpret it inside your computer.

An audio interface is a crucial tool for recording audio in a home studio. We use audio interfaces in place of mixing desks that you’d find in a professional recording studio. They embody just why music production is now so accessible in the age of digital music.

So, Just What Are Audio Interfaces Used For?

Whether you’re on a Mac or a Windows PC, audio interfaces serve the same purpose. Audio interfaces concert electrical microphone and instrument signals into a binary format that your computer can understand. Audio interfaces also route signals through a headphone jack so you can monitor your signal without the use of studio monitors.

A microphone converts the analog signal of your vocals or guitar strumming into an electrical one. This signal then travels through the mic cable to your audio interface which converts the signal into a digital (binary) one that your computer can read.

When the audio is then inside your DAW, a universe of editing tools are open to you.

Audio is the only dedication of audio interfaces. It’s their only mission in life. This makes them soundcards, and you don’t actually need a soundcard in your computer if you have an audio interface. I built my PC and I use an audio interface (Scarlett 6i6) in place of a PC soundcard. Because of this, I have pristine audio leaving my PC at all times.

If you’re looking at what microphone will get you the best result when recording your vocals, we highly recommend avoiding USB microphones and getting yourself an interface and a large-diaphragm condenser microphone.

Condenser mics and audio interfaces together will give you an audio recording with a mountain of detail compared to the vast majority of USB mics.

However, the Shure MV7 offers both USB and XLR outputs for a price of $344.50 (£292). If you’re only looking to record a podcast then this mic would be perfect. The detail of the voice recording isn’t as important in podcasting, but if you’re looking to record vocals or an instrument… we recommend avoiding USB mics entirely.

How Do I Connect an Audio Interface to My Computer?

On the subject of USBs, the majority of audio interfaces connect to your computer via USB connections.

This allows us to connect interfaces to tablets if you have a USB adapter. USB audio interfaces are the most common on the market because the vast majority of consumers have home studios rather than access to a professional studio.

For Mac, there are a growing number of audio interfaces with Thunderbolt connectivity as well as standard USB 2.0/3.0.

Thunderbolt connections have the advantage of faster data transfer speeds compared to USB, but they do have the disadvantage of being pricier. On the other hand, USB connectivity continues to get faster and the majority of home studio owners find that a USB recording interface serves each of their needs (including me).

What Are the Tech Specs of an Audio Interface?

THD+N is all output that’s leaving your interface that isn’t your desired signal (noise). We want as low a number as possible here such as

Dynamic range is the difference between the loudest and quietest signal that your interface can process at any one time. Here we want a number as big as possible!

Frequency Response represents how accurate your interface processes frequencies across the frequency spectrum. As standard, interfaces will say 20Hz – 20KHz with a ± at the end.

We want the value that follows the ± to be as low as possible.

The value that follows the ± represents volume cuts and/or boosts at certain frequencies. In this example, the interface will only apply cuts or boosts of 0.01 dB – which will be unnoticeable to you unless you have the hearing of Superman.

We at Mixxed work with a growing number of sample labels and contributors to provide you with a premium sample subscription service that’s more accessible than any before.

You’ll have access to our growing catalogue of thousands of loops, one-shots and sound effects that you can browse, download and keep forever for less than $3 a month.