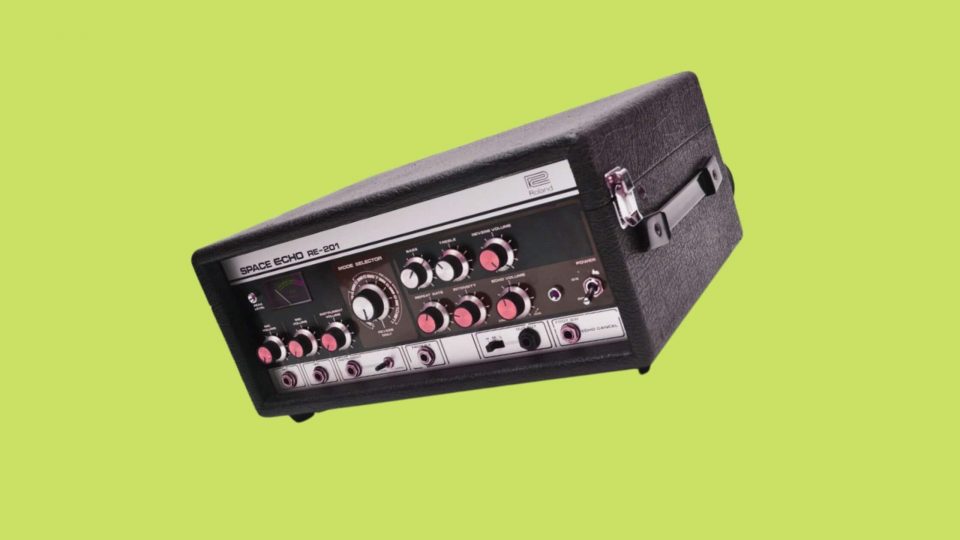 Delay is a time-based effect where audio is fed into the delay unit or plugin and played back multiple times at a rate set by you, the engineer.

With reverb, the signal is repeated many times in less than 50ms and that’s why we hear it as one mush of the sound. If the sound source was repeated at a slower rate than 50ms, we would hear it as an echo. And that, my friend, would be a delay effect.

What Does Delay Do?

Like reverb, delay creates a sense of depth in our music. We can also use it to add further tones, in a dissimilar way to distortion, and it’s widely used in many popular genres and electronic music.

In delay, the signal can echo multiple times and we can refeed the delayed signal back into the delay processor again to create more and more feedback. In turn, this creates a gradually delaying echo effect!

From Analog to Digital: A History of Delay Circuits

Now that they had the technique, next came the dedicated hardware like the Roland RE-201 Space Echo Tape Delay. These hardware units hit the scene, and more or less followed the same process.

For further effects, individual processing to any of the repetitions such as filtering could be added to give it a unique characteristic, as well as modulation to further replicate the original tape delay!

Along came the 70s (well, 1969 to be exact) and they brought the long road to digital with them.

BBD, bucket brigade device, was the first technology developed that allowed for compact delay devices like delay pedals. A BBD is a hardware chip that delays the signal that it receives from an input.

So, because BBD devices don’t use processors with coding that handles all of these delay processes, it’s argued that these devices are analog and not digital.

The famous analogy used to describe the process of a BBD circuit is firefighters transporting water.

This process will inevitably lead to spillage, and this is also true in BBD circuits. Information gets lost as the signal passes through each gate, and these losses add white noise to the signal. This noise prevents clean repetitions of the original signal. However, rather than be a flaw like it would be with quantisation when reducing bit depth, this noise adds a unique characteristic and tone that BBD delays are known for.

Itching ever closer to fully digital is the PT2399 chip. This chip, however still required external processing – so it was still an analog process. There is a digital process inside this chip, though!

The digital process is only used to control the delay itself. Again, the signal is split in two and the dry is sent straight to the output and the second signal is sent into the delay chip. The analog processes that occur are much the same as in BBD delays, like filtering.

If you’re handy with electronics, this was and is great. With BBD and all other analog hardware, you are free to fully customise what happens. You can add tubes to compressors, or clipping stages to your delay unit with a BBD or PT2399 chip inside!

In the image above, you can see that the PT2399 handles the delay process digitally but analog processes handle everything else from signal conversion to filtering. Like DSP chips, the PT2399 use a memory bank to store the sampled audio signal that it will relay as delay! The BBD chip, as you can also see, is a fully analog process that does not use a digital memory bank to undergo the delay process.

The Rise of Digital: The DSP Chip

DSP, digital signal processing, chips are the fully digital solution (if the name didn’t give it away)!

All processing, excluding ADC to DAC conversions, are handled solely by the processor with 1s and 0s. This binary code is controlled by algorithms inside the chip that allows for much more complex effects!

A drawback with digital processing, rather than using control voltages like analog circuitry, is that there will be latency on the original signal and reduced dynamics. The latency will only ever be marginal if it occurs, and the dynamics can be restored with the proper processing (upwards compression).

As well as digital processors in dedicated delay hardware, we also have software that emulates the effect of hardware – and we call these delay plugins.

If you’re looking to jump in and start using delay effects right away, Mixxed has thousands of samples for you to choose from and throw into your delay plugin!