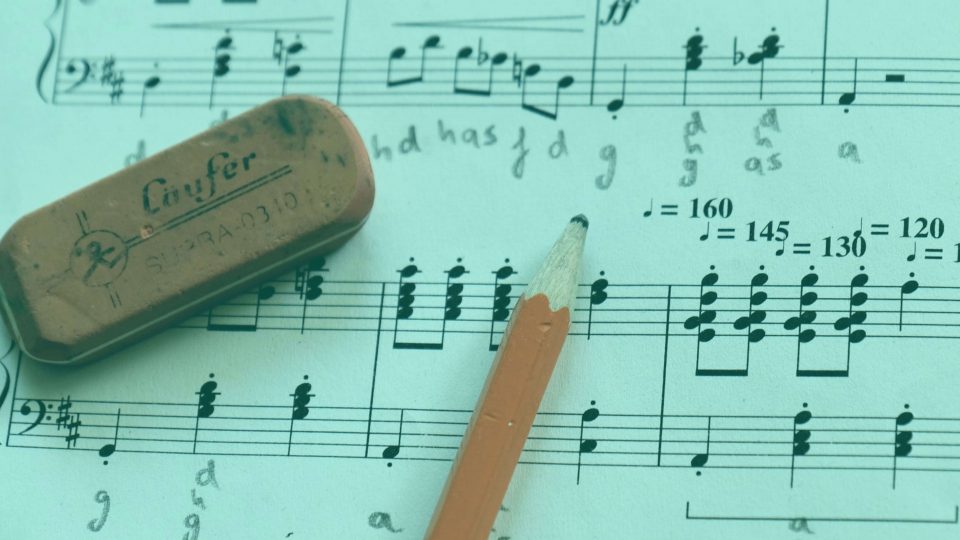 Music theory is scary for many budding musicians. At the end of the day, music theory presents music for what it truly is, and that’s mathematics.

What Are Musical Notes?

Whole, half, quarter and eighth notes are the four notes you’ll see more of if you ever read sheet music, compared to the likes of sixteenth notes. As we mentioned, each note has a unique note length.

In the image above, you can see that each beast represent note’s length value. For now, ignore the “Rest” column – we’ll come back to that.

You can see that two half notes make a whole note, two quarters make a half note, and so on. Sheet music can be pretty daunting to look at when you don’t know what the symbols represent, but each note has a specific symbol. You can see in the above image that whole notes don’t have a stem, quarter notes don’t have a hollow circle, and eighth notes have one hook while sixteenth notes have two!

This is a half note with a dot. The formal name for this dotted note would literally be a dotted half note. This means it’s a half note with half of its own value-added to it, becoming a 3/4 note. But it’s not just half notes that can get themselves a dot. We can add a dot to any note we like, and the dot adds half of the value onto the note in question.

Just like the notes themselves do, the rests we told you to overlook earlier also represent note duration. The only difference is that the instrumentalist is playing nothing.

Pretty cool, isn’t it? Or confusing?

You can see that each note, whether a whole or a sixteenth note, has its own rest symbol. This is because each rest symbol represents the exact same duration of time as its corresponding note, but the duration is of silence itself!

We use rests for a few different reasons. But they do give the instrumentalist an actual rest here and there, no matter how short it is.

So, shallow we start talking about how to use these symbols in music? To explain how these different symbols give us information about note durations, let’s look at notes on a staff…

What’s the staff, you ask? The staff is the 5 lines (called ledger lines) and four spaces that you see in sheet music. Both the ledger lines and spaces represent musical keys/pitches. Well, actually the notes sit on the ledger lines and in the spaces. We’ll dive deeper into the staff to the end of the article, so let’s just cover symbol durations first.

How to Use Notes

Before we begin, the time signature on display in the image below is 4/4 (which you’ll find the signature for in the far left of the staff). That’s four beats per bar (the top four), and a quarter note receives one beat (the bottom four). If that’s confusing, we have a dedicated article for time signatures coming tomorrow, so stay tuned for that!

However, in the image above you can see that there are two half notes on the first and third beat. Still in 4/4, the two half notes represent two beats each. So, with both of these half notes… that’s the four beats of the bar summed again!

Like with our first example, the first half note cuts out just before the second comes in as its note length doesn’t exceed two beats. You’re probably starting to see a pattern develop here, too. They’re called half notes because one note fills two beats out of four!

In the image above, you can see a singular eighth note. One quarter note is worth two eight notes, so it takes eight 1/8th notes to fill a bar of four beats.

Using our 4/4 time signature staff, you can see that there are 8 notes that look like quarter notes all joined together. These are actually eighth notes, too, but we have connected by what’s known as “beams“. The beam, which is the line at the top of each note that joins them all together, is exclusively used on eighth and sixteenth notes and not half, whole or quarter notes. This is because both eighth and sixteenth notes have less rhythmic value than quarter notes.

Beams also make it easier to read sheet music. As both eighth and sixteenth are often written in groups, beaming them together allows us to understand the music in front of us quicker and easier.

However, groups of two and three notes are acceptable.

As with 1/8th notes, so with 1/16th notes! The only difference is that rather than one beam, there are two. It’s exactly the same with the number of tails too. Two tails and two beams allow us to distinguish sixteenth notes apart from eight notes very quickly.

One eighth note is worth two sixteenth notes, so to fill four beats you’d need 16 sixteenth notes. And that, my friend, is why we call them 1/16th notes.

What Are Clefs in Music?

Now that you can identify the different notes and rest symbols, what they represent and how they interact with one another on the staff… let’s talk about the staff itself and how everything works together.

Okay, so you can see there are two separate staffs that are full of quarter notes. The top staff, with the big swirly G symbol on the left side, represents treble notes. The big swirly drawing is the treble clef.

The bottom staff, with somewhat of an F symbol, represents bass notes. This is the bass clef!

You’ll also notice that notes in the exact same place, and of the exact same duration value (one beat), represent a different piano key/pitch depending on whether they’re on the bass or treble clef.

But why use different clefs? Well, put simply, it makes music much easier to read and write.

The treble clef is supposed to look like a G. This is because it represents the G above middle C (on the second leger line up in the treble clef).

The bass clef is also supposed to look like an F. This is because the bass clef represents the F below middle C (the second ledger line from the top in the bass clef).

When put together, these two clefs cover the notes/pitches that are within the range of the human voice and also instruments.

Which clef a particular instrument or human voice sits on depends on the pitch of the vocalist/instrument! You wouldn’t have a bass instrument playing in the seventh octave, would you? No! That’s where your treble instruments would sit if they went that high!

In the example above, you can see that writing the treble notes in the bass clef makes it much harder to read and understand. This is why we use the two clefs – it makes writing and reading sheet music much easier to understand.

And to answer the burning question as to why some notes have a stem that points up and some have a stem that points down? That’s only for neatness. If a note sits on or above the middle ledger line, which is the note of B on the treble clef or D on the bass clef, then the note is given a downward stem so the stem doesn’t breach the staff of it can be avoided.

Is it time that you started putting these ideas into practice? We think so too! But you’re going to need some polished sounds in your arsenal if you want your project to sound like the effort you’re putting into it.