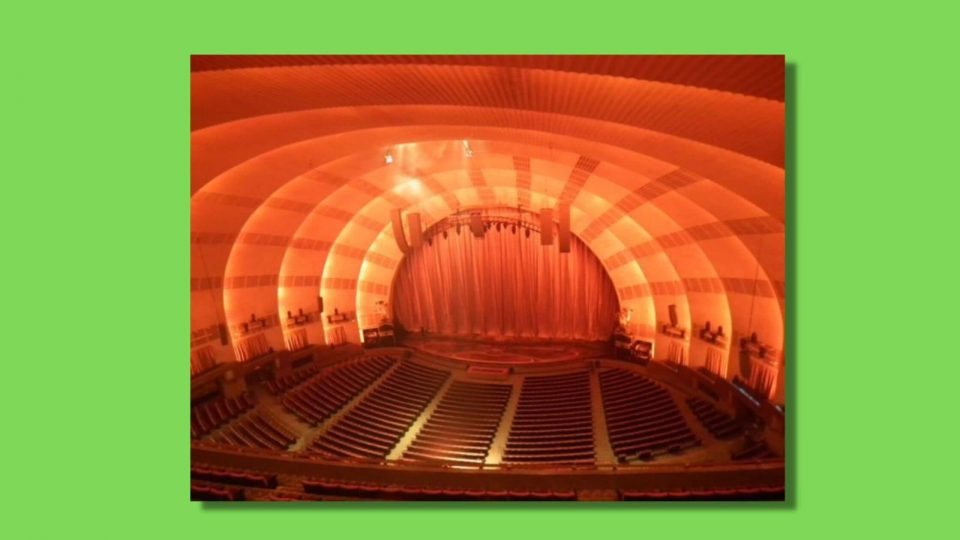 Reverb is created when any soundwave is reflected off of any surface in a room and causes multiple reflections of the soundwave to build up and reach your ear very closely together. Rather than hear each reflection as an individual delay, you hear the collection of reflections at the same time.

The bigger the room your sound source is in, the bigger the reverberation will be. Reverb can be intense in very large rooms and it can appear that the sound itself is actually continuing after the source has stopped playing.

We’ve replicated this natural effect so we can manipulate or exaggerate the natural reverberation of the room we are in.

Our human brains are pretty skilled at tuning out a lot of reverb anywhere we go, and we interpret it as background noise.

In our modern world of digital music, you can purchase digital reverbs in rackmount units, multi-effect boards, a reverb pedal, and plugins! But, before digital, you couldn’t carry the best sounding room with you to a gig, and you still can’t (or, maybe you can?).

Innovations in other ways of creating a reverb effect also were not portable enough.

Reverb is thousands of repetitions of a sound occurring so quickly that you only hear them as a smear of sound based on the original source. Reverb can last as long as 0.1 seconds or as long as 10 seconds!

In the image above, you can see a breakdown of the life cycle of reverb by LedgerNote.

The main elements of reverb that you control are:

Decay (tail of reverb as it drops below about 60dB)

The other elements you can control are the size, shape, and material of the virtual room!

What Are Chamber, Hall and Room Reverbs?

Back in the day, the only way to use reverb was to record it.

By placing microphones in the right places to record the natural sound of the room like a hall, room or basement, you had to manually “create” the reverb effect that we today use a piece of software for.

Your mind has probably wondered to “what about playing live?”

In a live scenario, you had to adapt to where you were playing. As you can imagine, there was a lot of “winging it”.

What is Plate Reverb?

Plate reverb was the first of such innovations to make reverb more user friendly but was no improvement in portability.

The plate was about a 4 by 8-foot steel plate that was stretched very tight & suspended in a frame.

For the magic touch and make it vibrate, a speaker driver was attached to one end of the plate. Like sound through the air, these vibrations travelled through the plate and were picked up by a microphone on the other end.

However, the mic would also record any interfering sound around the plate too. This made it important to keep the plate in an isolated space.

The size & tightness of the plate impacted the decay of the reverb. For a longer decay, the plate needed to be stretched tighter. Large “dampers” were also used to absorb the vibrations & shorten the decay!

For more usage in noisier environments, smaller plates with thinner metals in isolated, dampened boxes were designed. This also made plate reverb much more portable, but the effect did sound different.

Plate reverb is still popular today. But rather than carrying around a chunk of metal, all you need to do is select it as an option on your reverb (if it supports it)!

What is Spring Reverb?

Back in time, again, transporting a metal plate unit from gig to gig was hardly ideal (or possible). However, spring reverb came to save the day!

Spring reverb was created in a similar way to plate reverb. The difference is that the signal is electrically sent through springs, and doesn’t need speakers or microphones to be used.

Spring reverb has a “splashy” sound that makes it distinct from other reverbs and has become the main reverb for surf music, popular music born in the 1960s with high harmony vocals and surfing lyrics, due to the heavy amount of reverb used.

Spring reverb was built into most amps of the day, so most guitarists used it, but the amount used between guitarists varied massively!

And then we came into the modern age. Digital reverb is the biggest benefit to all musicians.

They’re available as rack mounts, multi-effect pedals and plugins (convolution reverbs)! Guitarists, drummers and EDM producers can use them all in any creative way, and that’s why reverb is one of the most common FX used today!

They’re used to emulate reverb from classic rooms, halls, plates, and spring reverbs from the day of innovation & natural recordings. They’re fantastic for bringing a unique character to any sound source (except your low-end sounds), and can be very realistic too!

Now go & apply some reverb to those Mixxed vocals!